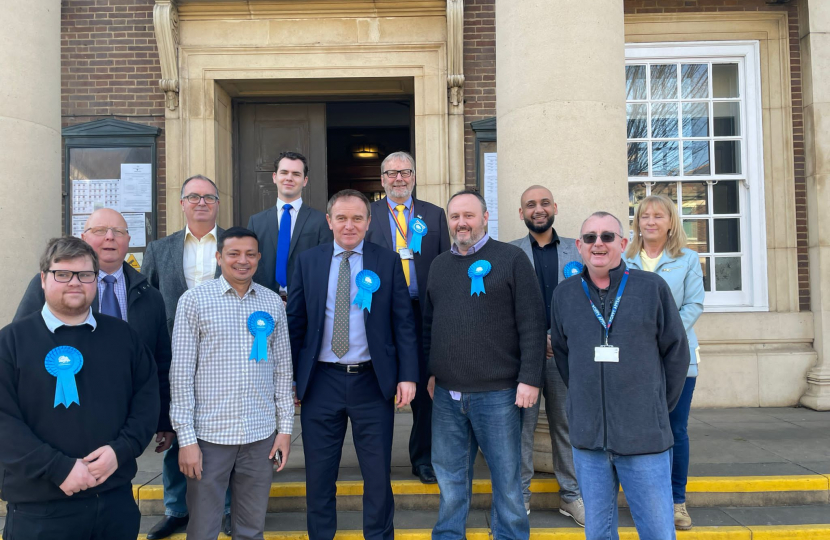 George Eustice MP, the Secretary of State for the Environment, visited Worthing this week (10.3.22) to learn about Worthing Borough Council's award of £5 million pounds of government funding from Department for Business, Energy and Industrial Strategy (BEIS).

He was met by Council Leader Cllr Kevin Jenkins, other councillors and Conservative members and was given a tour of the sites across the town that will be connected together by the proposed Worthing Heat Network.

The network is an initiative, the first of its kind in England that will 27 buildings including the Town Hall, library, Worthing hospital, leisure centres, law courts, police building and possibly even schools.

Investigation of the sewers under the town has revealed that they contain more than enough heat to replace gas boilers in public buildings. A centralised heat pump will be used to turn heat from the wastewater in the sewer into usable heat for buildings. The council has been successful in obtaining more than £5m from the government’s Heat Networks Investment Programme (HNIP) for preparatory work, initial construction and to secure a partner to part-finance, design, build, own and operate the entire network. Later stages could see the network extended to more premises across the borough.

George Eustice MP said, " It's been fascinating learning about these plans, to think that the heat we pour away in waste water down our drains can be recycled in this way to again provide heating across a variety of settings is remarkable. As we all take action to tackle climate change and seek to find new ways to find alternatives to fossil fuel this network has huge potential. I look forward to hearing about its progress."

The Department of Business, Energy and Industrial Strategy award of £5 million identified the Worthing project as a pathfinder which could be used by local authorities across the country, working with partners, to remove the reliance of buildings on gas heating and thus help slash carbon emissions which are the main cause of global warming.

Leader of the Council - Cllr Kevin Jenkins said, "This shows that this Conservative Council are fully committed to our own target of becoming carbon neutral by 2030 but more than that it says that, together with partners, we are prepared to adopt pioneering new methods to do so. The prospect of heating huge swathes of the town using the heat that is literally beneath our feet while phasing out environmentally harmful gas boilers, is a simple but wonderful piece of science that, if adopted around the world, could help save the planet."